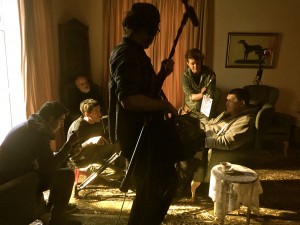 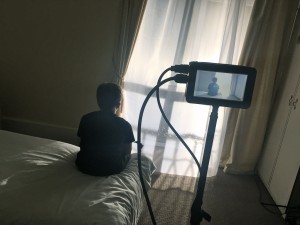 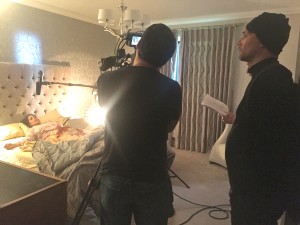 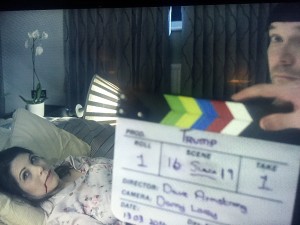 We’re not just event organisers here at the Isle of Man Film Festival! We’re also “growing our own” on the weekends.

Last week saw the ambitious plan to shoot two short films in four days with a small group of enthusiastic crew including two of the festival directors, Dave Armstrong and Zoe Guilford, and some newly trained filmmakers who have emerged through our MannIN Shorts training scheme.

Visiting friend-of-the-festival, Danny Lacey, a Director who runs his own production and media company in Leeds, brought a van full of shooting kit including an F55 camera, over from the mainland, along with his mate, the brilliant sound engineer Rob Wingfield, to undergo a gruelling but fun-filled weekend of filmmaking.

Dave and Danny set themselves the goal of writing a short screenplay each that could be shot in two days. The resulting scripts were shot in consecutive 48 hour timeslots. The first of these was Danny’s – Shadows – the story of a mysterious patient in a care home who claims to have been abducted by aliens when he was a child. Danny directed the short and Dave was his Director of Photography. Filming at a local care home in Douglas, the wonderfully patient Eastfield Mansion House, we employed the super acting talent of popular Raymond Barry.

The second short was filmed over two nights in a stunning private residence across town. With more or less the same crew, we grabbed the new script and went to work, this time with Dave directing and Danny operating the camera. With the working title, Inside Job, this film tells the story of a professional burglar on his last break-in, who ends up in dire straits (but not for the reason you might imagine!). Well respected actors Lisa Creighton and Shawn Sturnick were drafted in for this piece – and did us proud!

Both films are being edited at present and will be shown as part of our homegrown section in September’s festival proper. The back-to-back shoots have given us a taste for being on set again so we’re hoping to shoot another short in April to give further opportunities to the Island’s indigenous filmmaking community and to also compound what we are establishing as our unique selling point as a film festival – not just promoting film but making film.