Today has been notification day for all the extremely talented filmmakers who entered our 2014 Short Film competition. The standard has been exceptional and the judges have had a very hard time making their selections – and we’re not just saying that, honest guv! 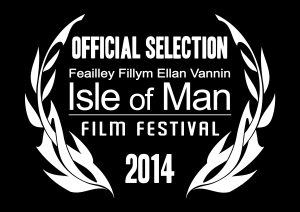 Those who are fortunate to make the shortlist will get one of these gorgeous Official IOMFF2014 laurels, designed by talented Isle of Man artist and graphic designer Adam Berry (www.AdamBerry.net). Knowing he is a fan of the man’s work, we asked Adam to create something that would subtly honour the design style of celebrated Manx artist Archibald Knox – who would be 150yrs young this year. (Hollywood Fact: Brad Pitt is one of Archie’s most famous fans, and even named his son Knox after him!)

All of the selected/shortlisted films will be shown in The Broadway, a state of the art independent cinema in Douglas, on the morning of Sunday 14th September. During this FREE screening, members of the audience will be asked to complete a simple marking form related to the films shown and their feedback will count towards the Audience Vote Award. Effectively meaning, if you are there, YOU can be a Judge!

Category-winning films will be shown again at the Red Carpet Awards Ceremony later on Sunday, and will automatically qualify to be considered for the Best of the Fest award. This final award will be personally chosen by the Chair of our Judging Panel – BBC Film Reviewer and Chief Film Critic of the Observer, Mark Kermode – who will also be presenting the awards at the ceremony.

Don’t forget to follow us over on Facebook, where our social media guru Nadine is posting regular updates – this week, for instance, she’s been sharing daily profiles of all of our lovely IOMFF team.