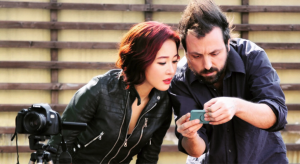 This summer a new kind of blockbuster is hitting the Isle of Man and there’s a place for you on the crew!

On Saturday 9th September between 11am and 5pm as part of his ongoing Redux Project, London-based artist activist and filmmaker, Richard Dedomenici will be at the Isle of Man Film Festival to run an intensive one-day crash course, where participants will help create sections from a popular film, shot-for-shot in the original film locations with low-budget props, costumes and effects. The edited film will then be premiered the next day as part of the Isle of Man Film Festival’s Sunday showcase in front of Critic Mark Kermode.

Richard DeDomenici:
Taking the cinematic world by storm, for the past four years creative tour de force Richard DeDomenici has travelled to film festivals across the globe (Glasgow, Berlin, Bangkok, Sydney, Seoul, Hong Kong, Shanghai, Beijing, Guangzhou, BBC4 and many more), recreating famous scenes from some of the word’s most iconic feature films. He’s created scenes from The Matrix, Dawn of the Dead, Cloud Atlas, Jurassic Park, Bourne Supremacy and Bangkok Traffic Love Story, all with the most basic of technology and on a shoe-string budget, proving the movie making needn’t be a million-dollar affair.

He regularly shows his work at Tate Modern and is currently working on several projects supported by Arts Council England.

Due to the nature of the course, places are limited and are likely to be filled up quickly, so please email zoe@isleofmanfilmfestival.com to secure your place.

To find out more about the project and to watch previous works:
http://thereduxproject.com
http://www.dedomenici.com
@DeDomenici