Another year, another festival over already. Phew! And what a festival it was… From daily free screenings with exclusive previews of international shorts and features, to a Q&A with the Props Master of hit Netflix show Stranger Things, to outdoor screenings of cult films in the grounds of a medieval castle, to our very first all-Island, four-venue movie pub quiz, to Hollywood actor John Rhys Davies sharing hilarious and poignant stories of his life behind the lens and treading the boards with our gracious and always-entertaining patron Mark Kermode. And much more.

None of this would have happened had it not been for the months of hard work put in by our core team – Richard, Laura, Ed and Katy – and the huge efforts over the course of the week itself by our small but passionate team of volunteers.

It would not have happened without the support of our sponsors and partners – Laurence Keenan Advocates & Solicitors, PokerStars, Pinewood, The Claremont Hotel, Manx Radio, the Arts Council and Manx National Heritage – and additional last minute help from places like King’s Court Theatre, Kirby Park Garden Centre, The British and Coffee Mann who answered the call when we needed them.

It would not have happened without the participation of the filmmakers from all over the world who entered our competition or provided content for the screenings.

It would not have happened without our patron Mark Kermode and our fabulous special guests – John Rhys-Davies, Lynda Reiss, Roger Dean, Gemma and Simon from the British Film Institute and of course ‘Jareth’.

But most of all, it would not have happened without YOU, our audience. After all, there is no point screening a movie if there is nobody to watch it.

Thank you, and Good Night. Same time next year? 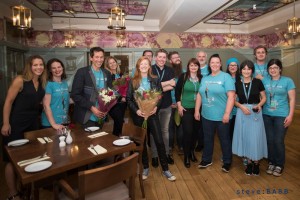