On 15th July 2016, Manx National Heritage and the Isle of Man Film Festival will host an exclusive evening with British watchmaker Roger W. Smith and screen ‘The Watchmaker’s Apprentice’ documentary at the Manx Museum.

The documentary traces the extraordinary horological work of Dr. George Daniels CBE and his protégé Roger W. Smith, and the fascinating relationship between two of the most renowned watchmakers of our time.

Dr. Daniels had a lifelong passion for the intricate details and inner workings of watches that led him to become one of the most revered innovators in the horological sphere. ‘The Watchmaker’s Apprentice’ contains the last interview conducted with Dr. Daniels, just months before his death, and provides an unprecedented insight into his workshop, astounding collection of vintage cars and beautiful home.

Dr. Daniels painstakingly designed and constructed his horological creations by hand from start to finish, sometimes down to even making his own tools – a feat which requires multiple skills that no other watchmaker has mastered completely. He invented the ‘co-axial escapement’, the most important horological development for 250 years. His invention was adopted by Omega and helped revolutionise the performance of high-end watches.

During his lifetime Dr. Daniels sold his watches only to select clients and today, his timepieces sell for in excess of £1 million. This exclusive evening at the Manx Museum will include the opportunity to see ‘The Space Traveller’s Watch’, one of George Daniels’ most famous creations.

The title subject of ‘The Watchmaker’s Apprentice’, Roger Smith, was the only man George Daniels considered worthy of shadowing him and continuing his life’s work. As an eager young student, Roger was inspired by Dr. Daniels’ visit to his watchmaking school in Manchester, so much so that he later boldly walked into George’s Isle of Man workshop with his own handmade watch. Daniels, unimpressed, sent him home with his rejected timepiece. Five years later, Roger returned to present him a new watch. This time Daniels was satisfied, and so began the relationship of master and pupil, one built on mutual respect and friendship, made more interesting because of their entirely disparate personalities.

Admission to this exclusive event is by ticket or VIP invitation only. Tickets cost £20, available now from the Manx Museum and manxheritageshop.com. The evening commences at 6pm until 9pm in the National Art Gallery at the Manx Museum. Canapes and refreshments will be served. 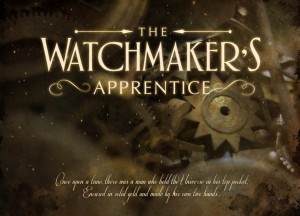