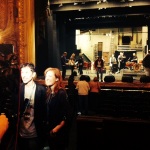 Well Isle of Man Film Festival kicked off well this evening with its first event at the Gaiety Theatre.
Davy Knowles, Island of Culture patron was in attendance to view segments of his upcoming documentary Island Bound which documented a musical journey from IOM and UK, over to America and the remote Appalachian mountains onto Nashville, and finally taking him to France and the famous St. Lorient Interceltic Festival. Along the way he met with famous musicians and personal idols such as Peter Frampton and Richard Thompson as well as an eclectic mix of residents from the areas he visited, who passed on traditional songs and musical techniques along with amazing stories that have gone on to inspire and invigorate Davy. The documentary was filmed by island based Dam Productions run by Dave Armstrong and Christy DeHaven. Christy sat with Davy on the stage throughout the screening reminiscing about the experiences they’d had on his personal music journey.
The evening continued with a fantastic musical set with Davy and his band. The talented Ruth Keggin who’d also featured in the documentary preview sang with him. The audience couldn’t get enough!
A truly wonderful start to the festival and a big thanks to Davy Knowles, Ruth Keggin and also to Culture Vannin, Isle of Man Film and Pokerstars for your support.