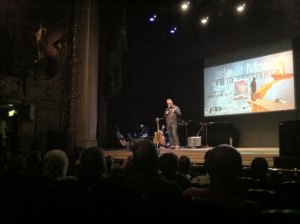 An Audience with Mark Kermode at the Gaiety Theatre was amazing. Boy can that man talk! He spoke about how bad film reviews are remembered when good ones are not. Does that mean we have to make this blog bad for it to be memorable? Ok I’ll try!

Reminiscing about filmmakers and films which were both great and terrible made the audience laugh out loud. Getting into newspapers and magazines was a lot easier 30 years ago Mark said: “You could just walk into a newspapers office in those days but now with email and internet there is more competition.” However, encouragingly he did say that he has never met someone who wanted to be a film critic that hadn’t become a film critic and if that means that his own job is on the line then so be it, it’s how it should be.

His witty anecdotes and rapport with the audience doesn’t surprise as the man is known for that but what comes across more and more is his passion for people to be the filmmaker they want to be and not the filmmaker they think others want them to be!

For many of us watching a black & white movie takes us back to our childhood. The second part of our evening ‘Beggars of Life’ Silent Cinema was a journey into a world where hobos, murderers, train wrecks and even love featured! The Dodge Brothers & Neil Brand’s musical accompaniment just made it all the more special. They played their instruments for over an hour drawing us into the tender romantic moments and building tension during the fight scenes and train crash.

The audience was amazed and many of them said the image of the evening will remain with them for a long time and some of the filmmakers even said they’d been inspired.

Well if that isn’t the sign of a successful evening then I don’t know what is?